The Circu-Lator I and II are complete, totally automated grain handling and drying systems. Wet grain from the field is unloaded directly into the drying bin. This grain is dried and automatically transferred to storage bins which may be located over one hundred feet away.

The Circu-Lator System can be easily expanded, fitting the needs of operations handling from 6,000 to 300,000 bushels per year.

No other drying system can match this combination of built-in surge capacity, totally automatic drying, and push-button grain handling.

The Circu-Lator has a built in unloading auger which will unload the bin at high speed until the grain will no longer flow by gravity. At this point, the Tapered Sweep Auger may be used to continue unloading.

Start your fan, heater and Circu-Lator. Fill the bin to any level with wet grain. The Circu-Trol (control panel) automatically starts the Circu-Lator when the bottom layer of grain becomes dry. The Tapered Sweep Auger rotates around the bin removing dry grain in a thin even layer.

This dry grain is pulled to the center of the bin where it is elevated to the top by the Center Vertical Auger, and transferred to the storage bin for cooling by the Continuous Flow Auger. The Ciru-Trol stops the Tapered Sweep when all the dry grain has been removed, automatically starting it again when necessary.

The drying process continues around the clock automatically day and night. Moisture checks three times a day are all that are required. These may be taken from the ground, using the Grain Sampling Valve. Circu-Lator owners operate the system 24 hours a day, without babysitting.

For completely automated grain drying, add a CompuDry Command Center that will take the moisture readings for you.

The Ciru-Lator System has wet holding capacity as large as the drying bin. Wet grain may be added to the dryi8ng bin at any time - as fast as you can harvest. This large surge capacity lets you harvest rapidly when the going is good - and stretches out the drying load when weather and other problems slow you down.

The Continuous Flow Auger is turned off when the adjacent storage bins are filled, and the Ciru-Lator becomes a Recirculating Batch Dryer. In recirculation, the dry grain is removed from the bin floor, elevated up the Center Vertical Auger and respread on top by the Recirculation Spreader.

The grain is normally dried in two passes when recirculating. In the first pass the Circu-Trol is adjusted to recirculate the grain when it reaches 20% moisture content. Wet grain is then added to the bin, drying as it is filled.

After the bin becomes full, the Circu-Trol is reset to dry to the desired moisture content in the final pass. When the bin is completely dried, the burner is turned off and the grain is cooled by the drying fan.

The tapered sweep auger removes thin, even layers of dry grain as it travels around the bin. Its patented taper is the secret of the Circu-Lator's uncanny moisture control, allowing it to remove only the dry grain which lays just above the drying floor. The Auger itself is constructed of a 1 1/4 inch diameter solid alloy steel shaft, with 1/4 inch thick flighting.

Dual Thermostats control the drying process. The Plenum Thermostat has a sensing element located in the air-stream below the drying floor. It cycles the dryer burner to maintain a constant, even plenum temperature regardless of weather changes.

The sensing element of the Grain Thermostat is located 8" above the drying floor where it senses the temperature of the grain in the drying zone. It automatically starts the Circu-Lator when the grain reaches a pre-selected temperature and moisture content, stopping it when the dry grain has been removed.

The Circu-Lator is driven by one high torque motor located outside the bin. Power is transmitted to the bin centered by a unique "shaft within a shaft" arrangement. A 1" diameter solid steel drive shaft rotates inside the 1 3/8" diameter tube which is the power shaft of the unloading auger. (The Circu-Lator is driven without turning the unloading auger.)

The 1" drive shaft powers the gearboxes, which in turn drive the Tapered Sweep Auger and Center Vertical Auger. The unloading auger is independent of the recirculating mechanism, and may be operated without the Circu-Lator.

The drying bin can be unloaded independently of the Circu-Lator through the built-in unloading system. This unloader is available in 6" or 8" diameter with either horizontal or vertical discharge. Both have a slide gate to control unloading speed, which is approximately 800 BPH for the 6", and 1,200 BPH for the 8"

A horizontal discharge unit may be converted to vertical discharge at a later date, with the addition of an "add-on" vertical unloader.

The Grain sampling Valve is installed on the Continuous Flow Auger and allows grain samples to be conveniently taken from the ground. 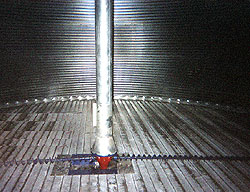 The Center Vertical Auger rotates gently, elevating the grain up the bin center. A 1/2" cushion space between the heavy flighting and tube prevents any possible grain damage.

Rugged gearboxes are built for long years of durable service. They are packed with moly grease, have oversize 1 1/4" stress-proof shafts, hardened steel gears and tapered thrust bearings. They are protected by three seals on every shaft opening and zerks are provided for directly lubrication each bearing.

Weight of the Center Vertical Auger is borne by a rugged cast iron spider wheel which transmits the load to thrust bearings. 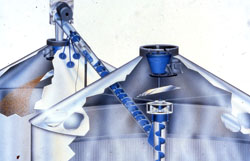 The Continuous Flow Auger is constructed of heavy duty flighting with the 1 1/4" shaft and 16 gauge galvanized tube. It is powered by a 1 to 5 HP motor depending upon the auger length.

The Conical Roof Boot shown in the inset provides a watertight mounting between the Continuous Flow Auger and drying bin roof. 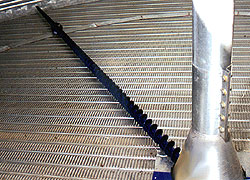 The cast iron wheel is inset several feet from the wall on bin diameters above 27 feet. This prevents the Tapered Sweep from touching the floor, and insures a faster, more uniform speed of rotation.

A grain drying system that combines the reliability of extra tough rugged construction with easy operation, built to keep pace with the harvest. It provides totally automatic in-bin continuous flow drying. Designed to fit bins from 18 to 48 feet in diameter.

The drying zone in the Circu-Lator is maintained at the bottom of the grain bin. Therefore, heated air blown into the bin at floor level must travel upward through wet grain to escape. As a result, the hot air becomes fully moisture saturated before it's exhausted - eliminating heat waste. As the grain dries, it is removed from the bottom of the bin, layer by layer, by the Tapered Sweep Augers. The dried grain is transferred to adjacent storage bins where it is cooled slowly. Accurate, even moisture control with the Circu-Lator assures maximum fuel efficiency.